Diablo is an RPG, Single-player and Multiplayer video game brought to you by Blizzard Entertainment. The game revolves around the labyrinth under the Cathedral who descends from the church to the catacombs and finally Hell itself. Later, the hero fights against Archbishop Lazarus and kills Diablo’s mortal form. The hero gets the Soulstone out of Diablo’s forehead, and Diablo transforms into Albrecht, a lifeless Prince. In the end, the hero drives the Soulstone into his forehead. The game begins when the player reaches in the Tristram, and multiple townsfolk helps him. The player needs to perform various actions, such as moves around the world, interacts with surrounding environment, casts a spell, etc. The game permits the player to learn spells, acquire several items, and come across with NPCs throughout his journey. The player is capable of utilizing numerous weapons to fight off monsters and attempt to conquer them. The game proposes a random number of quests and requires the player to complete them. Two of numerous quests are mandatory to finish the game while remaining are optional which assist in leveling up and revealing the backstory. Diablo includes lots of features such as Action, Adventure, Hack-and-Slash, Science Fiction, Fantasy, Survival, and more. 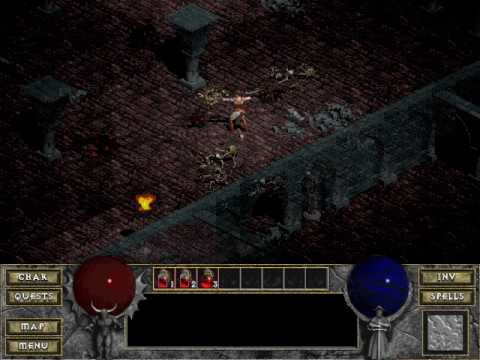