Metris Soccer is an Arcade, Sports, Single-player and Multiplayer video game by Metris Code Inc. The game lets the player participate in 3v3 matches in street football style. At the start, the player has to select his team members. The player needs to choose four major tricks such as Hop Nutmeg, Tornado Twist, Rabona Exit, and Zidane Spin. The player can alter the face of his character, which ultimately changes the skin tone. The game attempts to improve the player model and adds more customization options. It proposes a dynamic tournament to allow the player to engage himself in a different playthrough. The player can customize himself in a unique way. The game permits the player to represent himself on the streets with his styles. The player can also choose the gear for his lower body and change its color. A match occurs between two teams in which each player has to kick the ball towards his pocket and try to make more goals than opposing team within a given period. Metris Soccer involves prominent features such as RPG, Great Graphics, Street Football, Team, Soccer, Excellent Soundtrack, Atmospheric, Action, and more. 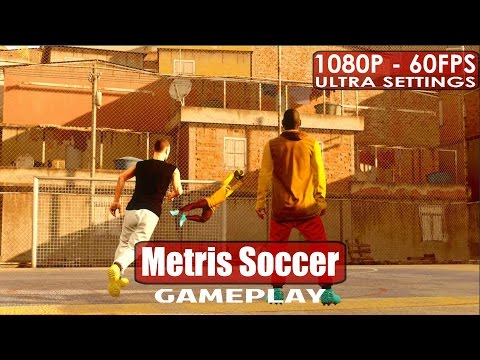